Brody’s Journey: One family’s path to tube-weaning and eating by mouth

Brody William Fisher was born on July 5, 2015 weighing in at 7 pounds 8 ounces and measuring 20 ½ inches long. He was perfect in every way and still is. He nursed well and took pumped breast milk from a bottle with no problems. He loved baby food when he was 6 months old and ate every drop of yummy fruits & veggies.

Around 2 ½ months old, I noticed a dip in Brody’s chest wall as I was about to bathe him one evening. I immediately showed my husband and called the pediatrician the next morning. She had us get x-rays taken and quickly referred us to an orthopedic surgeon. He sent us to get an MRI when Brody was 3 months old. He was diagnosed with scoliosis and needed to be monitored. The curves continued to progress in that time, so the orthopedic surgeon applied a Mehta cast when he was 7 months old. The first cast went well, however his second cast application was extremely tight. Frightening vomiting started and then he quickly stopped eating, drinking, peeing, and pooping. I had never seen vomit like what I was seeing come out of my baby boy. I would give him 1 oz. of milk and he would projectile vomit it all over me and the floor. I rushed him to the emergency room, where they removed the cast. After that, he wasn’t keeping anything down and started to drastically lose weight.

We were referred to a GI specialist who did numerous tests and told me Brody had a sliding hiatal hernia, which means that part of his stomach was in his esophagus. At this point, he told us he was “failure to thrive” as his weight percentage dropped from the 80th percentile to the 4th percentile. He told me we had to go to a pediatric surgeon and have a g-tube put in his stomach so he could get nutrition and start gaining much-needed weight. Also, he had to get a Nissen fundoplication, which is a wrapping around the esophagus so he could not vomit anymore. This major surgery happened when my baby was only 12 months old. 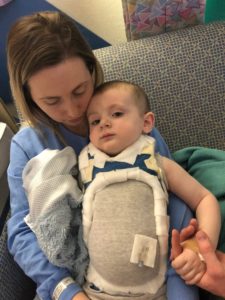 After this, we started receiving home health nursing and Brody also got physical therapy, speech therapy, and occupational therapy twice weekly. I was doing 6 bolus feeds a day, and Brody was connected to a feeding pump and received 540 ml of formula overnight. He had major oral aversion and was sensitive to certain smells and textures for quite some time. Over the course of several months, he had multiple casts in order to treat his scoliosis. He also had a speech language pathologist (SLP) that force fed him, resulting in him foaming at the mouth, and although she was immediately told to not come back, the damage was done. He hated food even more.

After some very rough months, we wanted and needed better healthcare for Brody. We went to Dallas to get a second opinion at one of the top hospitals in the country for pediatric orthopedics, Texas Scottish Rite for Children. Our doctor immediately decided the best thing for Brody was to give him a much-needed break. He had the cast removed right away and we gave him a 7-month break from casting. After this break for Brody’s body that was still accompanied with difficulties in eating no matter how much we tried, the doctor thought he was ready to start back on scoliosis treatment. This started an even deeper journey we would never look back on as we sought the absolute best for Brody.

We put our house on the market, left San Antonio, our family, friends, and where we had been born and raised in search of better for our son. We utilized our very small network in the area to find the best of everything we could. The best pediatrician, who referred us to the best GI doctor, who referred us to the best SLP, Jenny McGlothlin, whom we never could have imagined would put us on the path that we so desperately pursued.
I made an appointment with Jenny as soon as I could and at the very first visit, she said Brody had a severe tongue tie. Of all the many specialists, doctors, surgeons, dentist, therapists, and nurses that had seen the inside of Brody’s mouth, we finally found the first obstacle to point to that had been causing some of the difficulty. She referred us to a pediatric dentist in Fort Worth who fixed his tongue tie. This slowly started to help with his eating and drinking. We were also referred by GI to a dietician that helped us with Brody’s nutrition. She closely monitored the amount of growth that Brody achieved and helped us adjust his feeds accordingly.

Eventually, we were accepted in Jenny’s STEPS program at the University of Texas at Dallas Callier Center and read her book, Helping your Child with Extreme Picky Eating: A Step-by-Step Guide for Overcoming Selective Eating, Food Aversion, and Feeding Disorders. STEPS was a 12-week intense eating therapy session that was an hour and a half session with 4 other children. Even though it was a two-hour round-trip drive for us, this was the best thing we could have done to make Brody a successful eater. We used to be happy when he would take a bite of a chip, a sip of milk, or a bite of meatball. Jenny encouraged us to food log (journal) breakfast, lunch, dinner, and snacks. I did this throughout the STEPS program and beyond. When I would look back, it helped me to see how much progress he had made. At the time it was difficult and emotionally draining, but when I reflect on it now, I realize how impactful it was on our journey. When there would be days of what I thought was no progress or discouraging results at a meal, I flipped the pages back months, weeks, or even days before that. I noticed that where I used to rejoice in him finishing a couple spoons of chili had turned into half a bowl. It took encouraging, family style eating, no distractions such as dogs or TV, and a positive eating environment. Even then, we knew we had so far to go to get him to where he wasn’t going to need any supplemental feedings through his tube. We gradually began to pull back on bolus feeds so that he would be hungry and want to eat orally.

At the time it was difficult and emotionally draining, but when I reflect on it now, I realize how impactful it was on our journey.

Jenny had such great advice for positive eating and drinking and building a great relationship with food through responsive feeding practices. As Brody’s eating continued to expand, we came to our next obstacle, pocketing. Brody dealt with severe pocketing or “cheeking” food. Jenny had us introduce a mirror at mealtimes to do “cheek checks” and it helped so much. She also had us buy a Doidy cup for his water so he could wash down his food. We always had his “safe foods” on the table, foods that we knew he loved and would easily eat. We finally got to a point we were ready to continue with a “tube wean” which is where we would slowly pull back on bolus feeds and eventually, he was eating three meals and two snacks a day with zero tube feeds.

After many months of zero tube feedings and good weight gain, Brody’s g-tube has been removed! He is 5 years old and had his tube for over 4 years. Everyone’s journey is different. Some are long and some are short. Trust Jenny’s book and her STEPS program. Advocate for your child always, and never stop your pursuit of BETTER! 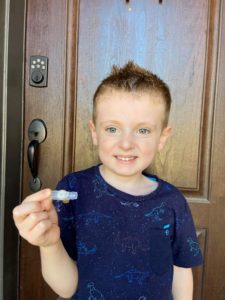 Brody gets his tube out!