I was watching a show on Netflix* when I caught this line, “I’m not forcing, I’m just aggressively facilitating.” My ears perked at the words facilitation and force, and of course made me think of children with extreme picky eating, of feeding, and the “aggressive facilitation” that can sometimes happen, even in feeding therapies. There is much research that suggests that when children are pressured or coerced to eat, overall intake, and intake of fruits and veggies decreases.  Here are a few examples…

Whether it is at  home or in therapy, attempts to GET children to eat often backfire.  But that doesn’t mean do nothing. In essence, our work and our book is about helping parents find ways to facilitate the child’s development around eating. Sometimes parents may not realize that their attempts to help a child try a new food may be perceived as pressuring by the child. As one mom said, “If he senses at all that we are invested in him eating or trying something, it’s over. We’ve tried having him cook, kiss foods, and looking plates, but he knows we are doing all of this to try get him to eat.” And remember, some children are far more sensitive to any suggestions or agenda around eating than others. 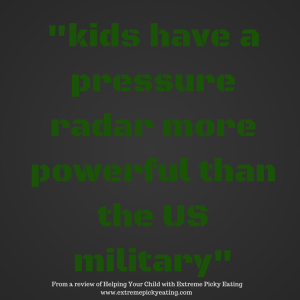 Here are a few thoughts on facilitation and pressure:

“Encouragement” often turns into the “positive” pressure tactics described in chapter 3. One mom mused, “I was told to not pressure but encourage her, but I feel like everything I try turns into pressure.” In the book Promoting Positive Parenting, authors Woolley, Herzmann, and Stein describe “maternal facilitation,” a great explanation of support without pressuring; it is “a measure of sensitive responsiveness, which refers to any maternal behavior that assists infants in an activity in which they are engaged or seem ready to engage” (2007, 112; emphasis ours).

The distinctions among “encouragement,” “pressure,” and “facilitation” are tricky, particularly if, in your family, encouragement (“try one bite”) seems to help an easygoing sibling expand the foods he eats. Facilitation might for example include holding out two spoons and letting the child choose, while pressure is spoon feeding a child as he leans and twists away. Facilitation and support mean cutting apples into thin, peeled slices for ease of eating (more on food preparation in chapter 7), while pressure is holding a slice in front of his mouth and repeatedly asking “please try a bite.”

While the authors refer to infants and moms, we believe all parents and children benefit from sensitive facilitation and response to the child’s readiness and willingness to participate. (Hand a child a piece of food that she reaches for, help her hold and chew on her chew tube dipped in yogurt, and so on). Bottom line? Regardless of the words used to describe it, you will know if what you are saying or doing has crossed into pressure by your child’s reaction.”

excerpted from Helping Your Child with Extreme Picky Eating 2015