5 Tips to Support, Not Sabotage, Your Child’s Appetite 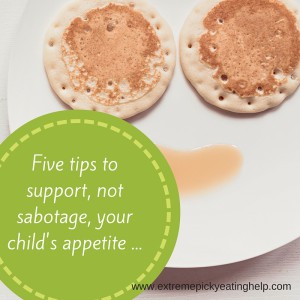 Four- year-old Nathan ate fewer than ten foods, “failed” twelve months of behavioral and sensory feeding therapies, and was holding steady at the first percentile for weight. Medical and oral-motor work-up was unremarkable. On the advice of a dietitian, his mom offered his favorite straw cup with Pediasure several times a day, which he would sometimes sip. Mom, Elise tried effusive praise and rewards of stickers for any bites he would take, but this was becoming less and less effective. Mom described Nathan as cautious, not overly anxious, but “incredibly strong-willed.” She shared, “If he even thinks we want him to eat something, he shuts down. The only food he has tried in the past year was entirely on his terms, usually away from home.” Elise describes their routine:

6:30– 7:00 a.m.: sippy cup of milk— Nathan enjoys cuddle time in bed with mother, father, and baby sister, who gets a bottle at the same time

Nathan’s story is not uncommon, and illustrates five opportunities to support appetite:

1. Phase out the morning pre-breakfast drink. Many families use supplements or milk to support calories and nutrition, giving a sippy cup or bottle first thing when their children are likely to drink a good amount, often with a cuddle. Alas, this kills appetite for breakfast, but parents may fail to make the connection. (When told to “just get rid of” a bottle or sippy cup for an older child, parents report upset children whose intake drops dramatically.) To phase out the sippy or bottle while supporting appetite, try these suggestions:

Many families are pleasantly surprised that within a few days the kids are used to the new routine: they are attached to cuddle time, not the sippy! It supports the child’s appetite and emotional needs to bring the sippy or bottle into the routine, phasing it out rather than going cold turkey.

2. Incorporate supplements into meal and snack time to continue to support nutrition (if needed) as your child learns to enjoy other foods. Supplement drinks, or smoothies (even green ones) are food and can dampen appetite if given between meals and snacks.

3. Establish a real routine. While Nathan’s day had a rhythm to it, their “routine” of meals and snacks turned into “grazing.” They spent far too long (six hours a day) at the table or with food, hoping Nathan would eat a few more bites. With an hour or less between eating opportunities and a little something in his tummy most of the day, he had no chance to properly develop an appetite.

4. Have eating opportunities without distractions, in a pleasant setting. While screens and toys may get a few more bites in, the distractions can make it harder to tune in to those at-first hard-to-hear hunger cues. (Page 182 goes into weaning slowly off distractions if your child’s intake drops.)

5.  Stop ineffective rewards, bribes, and praise. Many parents realize that force-feeding, yelling, or punishing doesn’t help a child’s appetite, but even praise and rewards backfire with many kids. Elise was encouraged to stop offering or holding food to Nathan’s lips. Her observations that Nathan has branched out on his own terms, and that the bribes and rewards were becoming less effective helped her abandon those practices. (One of our favorite quotes from Kerzner et al reinforces her hunch about the coercive tactics she has tried: “These practices initially appear effective, but become counterproductive, resulting in poor adjustment of energy intake, consumption of fewer fruits and vegetables, and a greater risk of under- or overweight.” ) We encouraged Mom to sit and eat with Nathan, and to allow him to be a participant at mealtimes, not the focus.

Within a few days of Mom shortening the time at the table, removing pressure and distractions, decreasing mealtimes, offering Pediasure only with the afternoon snack, and having the morning milk with breakfast, Nathan ate a larger than usual breakfast and even said “I’m hungry” for the first time! While many parents are told that their child can’t feel hunger, in reality the child may not have been given an opportunity to develop hunger and learn to sense and respond to hunger cues. There are many ways parents can support a child’s ability to tune in to hunger and fullness cues, and to their curiosity around trying new foods.

* This information is general advice and not meant to replace careful monitoring by a health care team. Medical and functional issues must be addressed and parents of a child with marginal nutritional status must be supported and followed closely.

Nathan’s story is excerpted from our book, Helping Your Child with Extreme Picky Eating chapter on routine.